Here’s a great set of articles, by Bret Devereaux, on what he calls the Fremen Mirage, or what might be called the Myth of the Warrior Race. There’s also a great sub-series on Sparta, one of the most pernicious of these myths. All this should be of great interest to conworlders, as well as people interested in the history of our planet.

A warning, though: there’s a lot to read. I spend most of Friday on these. 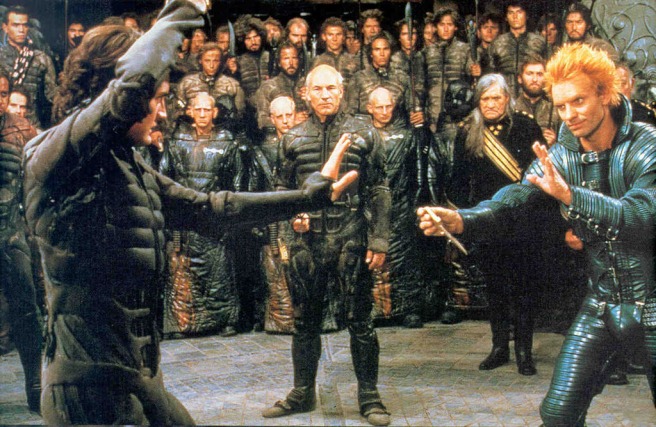 Pedantic note: Devereaux likes the miniseries, but this is from the Lynch film, which is the only one I saw, and whose costume design rocks.

The basic elements of the myth are:

Dune happens to be a shining exemplar of this; in the Sparta series he invokes 300. His use of the name invites digressions on the book, and he provides one, but it’s probably better than limiting the idea to one real-world exemplar, or using squishy words like “barbarian”. I’ll just use “barbarian”, but do imagine scare quotes used throughout.

To summarize the rebuttal:

The obvious counter-rebuttals, and the counters to those:

But again, it’s never really about the barbarians. The myth was elaborated, though undoubtedly not originated, by Roman writers around 100 BCE to 100 AD… that is, the height of Roman power, when Rome was still expanding and the Germans were nothing to worry about. It was basically the complaint of one bunch of rich Romans against another. None of those making the complaint gave up their wealth and went to live in military camps in order to build up their manliness. Few of them actually visited any of the barbarians they praised. (Caesar did, but he was fighting them; he wasn’t engaged in conservative whining so much as flattering his own enemies in order to puff up his victories over them.)

Sparta is a fascinating story, and when you really look at it, it proves just about the opposite of what its fans think. Consider this: there were just 8000 full Spartiates– males with full citizenship– in 480. It was the largest state in Greece, and it was able to send just 5000 hoplites to Plataea. Athens sent 9000. Aristotle notes that if worked like other Greek states, Sparta could have supplied 30,000 hoplites. So its 85%-slave social system made it underperform in number of troops, a key metric for military success.

Nor were they that much better than other Greek troops. They shared the same equipment and tactics of all Greek states, and phalanx warfare was a matter of group action, not individual prowess. The Spartans may have had no profession but war, but they didn’t bother to train much.  Sparta did defeat Athens in 404– with the help of Persian funds. When it attempted to defy Persia, Persia simply switched its subsidies to Athens, and Sparta’s response was to appease the Persians by giving them the Ionian cities. Very manly!

And that was Sparta’s height. By 418, Spartiate strength was down to 3500.  By 371, it was 1500. Not coincidentally, Thebes was then able to shatter Sparta’s power and free Messenia, the territory that supplied most of its slaves. Devereaux goes into the reasons why, but in short: the Spartan elite was self-inoculated against all change. Their system was based on exclusion: excluding the helots, excluding elite members who couldn’t pass the agoge training system or maintain the common mess, excluding impoverished Spartiates. They had no way of maintaining their numbers without changing at least some of their ideology.

The myth was revived in the 19th century, added to the malodorous stew of European racism. Tacitus’ praise of the Germans (who he had never met) were intended to shore up Roman manliness, but they found a new audience in Germany, which liked to see itself as a scrappy and manly warrior race. France found its warrior race in ses ancêtres les Gaulois, while the Brits chose the Celts. (Not that this made the English particularly appreciate their sister nations.) The British in particular loved to divide their own subject people into warrior and non-warrior races… not the least reason they lastingly screwed up Indian politics.

One thing Devereaux doesn’t quite go into is the importance of the Fremen Mirage to modern conservatism. A lot of conservative ideas make no sense unless you interpret them in its light. Adapting the adage that American vote as if they were temporarily distressed millionaires, we may say that conservatives see themselves as temporarily comfortable Spartans. Yes, they live in nice suburban houses and have nice office jobs, but in their minds they’re living in a mess hall with other manly men, ready to lay waste to the softies. Spartan attitudes about the 85% of slaves below them in the hierarchy are relevant as well. Conservatives are fond of hazing rituals, even for themselves; but they also approve of pure misery for the lowest swaths of society (i.e., everybody but themselves).

What can you do with all this in your conworld?

One, throw out your Warrior Race– your Klingons, your Dothraki, your Cimmerians, your orcs. These are all fantasies made by civilized people who are tired of civilization but don’t want to leave it.

This doesn’t, of course, mean that you can’t have warriors, or war. War is hell, but storytellers can hardly do without it. But get rid of the notion that civilized states are bad at it, or that barbarians are particularly cruel. Agriculturalist empires are very good at cruelty in war.

At the same time, you should balance Devereaux with Scott.  (Not that they conflict, but they have different emphases.) The state has been near-unstoppable for the 5000 years since its invention. But until recently, it had real trouble extending its power over the people who lived in non-grain areas (marshes, mountains, jungle), and over nomads. The first group may be sizeable, but is not usually a threat to states; the second is.

But your nomads should be based on real nomads, not on the mythical Warrior Race. Some generalizations about real nomads:

Due to geography, Europe, India, and China were never going to be overwhelmed forever by nomads anyway. They just have too many people. Arguably Mesopotamia did not have this advantage, and that’s why it was not a major power after 500 BCE. More on that in my upcoming book…

States do decline, but it’s not due to luxury and corruption. More often, it’s due to the concentration of wealth, or ecological factors, or the elite losing interest in supporting the central power.

Finally: unlike individual humans, an aged state can rejuvenate itself. This may be as simple as a vigorous new dynasty taking over. Both Rome and China had some dramatic periods of instability or civil war, and yet kept picking themselves up for centuries.