I’m working on my Lexipedia, and I’d like to have many examples of semantic divisions that are different from English.  Things like this:

But the more examples I have the better, so if you have some, lay ’em on me (markrose at zompist dot com).  Note that what I’m after is not just different words, but different categorizations of the world– places where a semantic field is mapped out differently (even if trivially), as in the above examples.

Naturally, I’ve accumulated quite a few examples already, from various languages, but they’re mostly things I’ve run into randomly, and you alert readers may well know some that I’ve never heard of.  (If it’s in Women, Fire, and Dangerous Things, however, I’ve heard it.)

Years ago I picked up a copy of Rius’s Los Supermachos, which started back in 1965. I finally got around to finishing the book.

It’s a satire on Mexican life, at the small town level.  It’s only available in Spanish, I’m afraid, which is a pity, since it’s a useful counterpoint to the idealized, feminized world of Beto Hernandez’s Palomar.  Rius’s San Garabato de las Tunas is highly patriarchal, with strong and open class and race divisions.

The comic is apparently hilarious, though I can’t exactly see it.  It’s my fault, though: when I read it to my wife, she laughs at every page.  I don’t have any trouble seeing the humor in (say) Fontanarrosa’s Inodoro Pereyra, so I have to conclude that Rius has a way with words that doesn’t always translate well.

At the time he was creating Los Supermachos, Rius was a communist; this is chiefly noticeable here in a retelling of the story of Adam and Eve as a parable of the Cuban Revolution.  It’s actually one of the weaker chapters, as the satire is much more pointed– and universal– when he focuses on the inhabitants of San Garabato: the pompous and stupid landowners, the avowedly fascist cop, the socialist shopkeeper, the religious old ladies, the local bum, the agreeable everyindian Calzónzin.

One thing that comes across very well is the paradox of the PRI (Partido Revolucionario Institucional)– Rius calls it the RIP– the party that had a near-absolute domination of Mexico fro,m 1928 to 2000.  The party began in a revolution and retained the rhetoric of democracy and social justice, and yet was soon taken over by landowners and bureaucrats.  Thus the mayor of San Garabato, Don Perpetuo, is in general a racist rich exploiter, but in his election speeches he’s all about the Revolution and the People.  It’s a rich environment for a satirist.  In one of the chapters, just to drive the point home, Rius introduces an (anachronistic) Villista– an actual revolutionary– who comes down from the mountains to inquire after the revolution, and is disgusted by its current guardians.

He’s more generally amusing when he’s not so didactic, however.  One of the best chapters starts with one of the characters discovering that some canny operator made a ton of pesos by faking an appearance of the Virgin.  This leads to not one but two groups who try to do the same in San Garabato.  Their candidates to impersonate the Virgin are both male and ugly, but nighttime and a coat of paint are expected to take care of that.

Though Rius wrote at least one book on feminism, one weakness of the comic is that he does not have a very evolved view of women.  His female characters basically fall into the categories of naive and silly, old and superstitious, or dominating viragos.

(Another bit that rubbed me the wrong way: one chapter borrows, without credit, some situations and jokes from Jonny Hart’s B.C.  Not cool, comrade.)

One of the fascinations of the book is its attempt to reproduce colloquial mexicano.  Lots of interesting slang terms and sound changes…  (Plus, one of Rius’s gags is how his not-very-educated characters tend to mangle learned words.  Even the mayor is illiterate.)

As I mentioned before, I’m scanning my Dad’s slide collection.  I wasn’t happy with the scans I was getting from the scanner I was using, so I got a new rather more expensive one.  It came today, and I’m much much happier.

Here’s an example of what I’m getting: 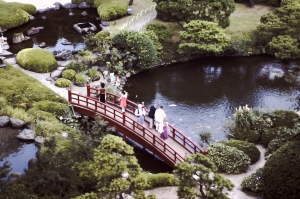 Click to enlarge either, which you’ll have to do to really see the difference. The old scanner produced this weird blocky effect that make the pictures look terrible at any kind of magnification.

I like this particular slide, but it does seem a bit fuzzy.  I think that’s Dad’s fault though– other slides I’ve scanned are sharper.

The only downside is that it’s slower, but I can live with that. Plus my Dad is excited at the idea of seeing all the pictures again and helping me identify them.

I picked up Elaine Morgan’s The Descent of the Child and devoured it in an evening.  I liked it a lot, and Morgan is very readable, and yet I have to throw on a steaming pile of caveats.

That’s because she’s a promoter of the Aquatic Ape Hypothesis– the idea that humans went through an aquatic or near-aquatic stage that accounts for their many differences from the other apes, such as hairlessness, a descended larynx, their thick layer of subcutaneous fat, and their early birth.  It’s a fascinating theory which turns out to be highly problematic.  Hairlessness, for instance, doesn’t correlate nicely with aquatic habitat; think of otters or polar bears (who are excellent swimmers).  Humans don’t have characteristics sea animals generally do have, such as very small ears.  Worse yet, a lot of the supposed facts of AAH supporters turn out to be just wrong– e.g. that non-aquatic mammals can’t hold their breath, that human infants are unusual in having a swimming reflex, or that our layer of subcutaneous fat is attached to the skin rather than the underlying tissue.

There’s only one chapter in the new book about the AAH, but when someone has a tendency to misquote the scientific literature, you have to mistrust what they say even on other topics.

The Descent of the Child is about babies and children.  Morgan goes over the biology of reproduction, gestation, birth, and childrearing, with a focus on where we are the same and where we differ from the other primates.  It’s a fascinating story, full of interesting facts.  For instance, we live at a much slower pace than would be expected for a mammal our size.  E.g. compared to chimpanzees, the age of puberty and our life expectancy are doubled.  Gestation proceeds at a leisurely pace, too, fitting nicely to a developmental schedule that should see the baby in the womb for 18 months.  Halfway through, the baby is evicted, resulting in an unusually inert and helpless newborn.

Her larger point is that in seeking to explain human features, scientists too often concentrate on adults only.  But the whole life-cycle is subject to evolutionary pressure, and things like the human baby’s helplessness are serious puzzles… isn’t it dangerous to have offspring that vulnerable?

At the same time, one of hte hallmarks of humans, compared with the other apes, is neoteny.  Even as adults, we are much more like ape children than we are like ape adults– in appearance, in bipedality, in general playfulness.

This touches on linguistics; Morgan suggests that it was more likely to be children than adults who originated the first language, much as the best ape language learner was the bonobo Kanzi, who picked up a keyboard-based language by watching researchings attempting to teach it to his much denser mother.

Anyway, fun book, just double-check any facts she gives before recycling them in conworlds or at cocktail parties.

So, some kind of fit took me and I decided to create a 3-D model of the island of Arcaln. It’s far from done, but here’s a peek.

Longtime alert readers will recognize this Verdurian home.  I’m going to have to fire up XSI Softimage to create some Verdurian furniture.  I wish HL2 came with more plants… filling out the garden may be tedious.  (The cheap way to make a plant is to put images on some intersecting, transparent flat surfaces; but this is only reasonably convincing at ground level.)

(No, Verdurians don’t have trucks.  It’s there to help me with scale.)

Here’s an overview of about half the island.  The walls in the distance are placeholders for the fortress of Arcaln itself.  You can see that there’s a lot of work to go.

You can see that I’m using a blown-up city plan as a guide to building placement.  I’m using Hammer, which has the neat idea of a 3-d skybox.  Essentially you have the center of the map at full scale, and then embed it into a larger model that’s done at 1/16 scale.  The game engine combines the two areas.  The effect is that you can have a huge vista going off into the distance, though you only can explore a small part of it.  This technique is used in all the Valve games.

A Valve map, by the way, is about 2500 feet square, or a quarter square mile total.  With the skybox it gives the impression of an area up to 8 miles on a side.  (This is actually considerably smaller than Bethesda maps.  But Valve’s Hammer editor is far easier to make buildings in.)

This project has made me think hard about the scale of my city map.  The one filled-in block is about 1/4 the area of a Chicago city block– that is, it’s about 1/16 mile square.  Yet it looks much bigger.  It was worse a couple days ago; I finally realized that I was creating the buildings way too small– they were about 20 feet wide.  The last few days I made them twice as big or more.

So far the finished parts of the city look a bit artificial– too clean and uncluttered.  I may leave it that way– it’s going to be enough work as it is.  To make it look more real, I’ll have to put a lot of time into minor details, terrain, and clutter.  And then maybe add a bunch of zombies and headcrabs so it’s a playable HL2 map…

I finished Rage.  It is indeed about 21 hours.  At the end it gets very sf-ey, with the bafflingly over-engineered corridors familiar to us from sf movies:

The final mission feels strangely incomplete.  The final boss fight consists of a bunch of charged-up mutants– monsters you’ve been fighting all along, which can be easily disposed of if you bought shitloads of wingsticks and pulse rounds.  And that’s it.  You kill a bunch of them but not, you know, any particularly large ones, there’s a little cutscene, and you’re done.  It’s much less hard than many of the previous missions.

It’s a weirdly meh game given that they’ve done a lot of things right.  Once you have the right drivers, it’s beautiful, even more so than Fallout 3 or FNV.  The voice acting is good, and you can talk to most anyone.  The racing sections offer a change of pace and a challenge, though I really really hate WASD controls for vehicles.  The fighting missions have just enough challenge and variety.

But I find I don’t have any great desire to play it again.  I think it’s because they’ve skimped on toys and story.  The closest thing to a fascinating toy is the remote controlled mini-car, but there’s precisely one mission where it’s useful.  As for story, they’ve got one, but they didn’t bother to add explorable background material (as in Fallout or Dishonored), there’s no character you care for, and no one is particularly distinctive or funny or scary.