Since Yesterday is Frederick Lewis Allen’s sequel to Only Yesterday, and deals with the ’30s in the same way.

It’s a better and a worse book, due to its subject matter.  The first book had a lightness of tone (even when dealing with scandals and gangsters) that had to be abandoned facing the enormity of the Depression.  A quarter to a third of the population out of work, the farms of the Great Plains blown away as dust, heads of corporations bewildered as to what to do next, fascism marching in Europe– it wasn’t a cheery time.  The events give the book greater depth than its predecessor; but then they refuse to provide a nice coda.  He concludes with Britain’s declaration of war; the problem is that his story is only half told.

This is clearer on a chart.  Here’s US industrial production from the height of the stock boom (September 1929) to the end of the war (August 1945): 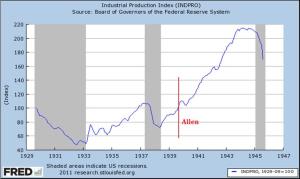 Allen ends at the red line.  No wonder things still looked bleak!  Though the overall trend was up, immediate memory was dominated by the 1937 recession, which had gobbled up 2/3 of the gain since the New Deal.  Production was barely at the 1929 level again; it was hard to imagine that in a few years it would double that number.  (And keep rising; the current value of the index is over 1200.)

As a history of the New Deal, I prefer Wiliam Leuchtenberg’s Franklin D. Roosevelt and the New Deal, which goes into more detail and with more historical perspective.  Still, it’s an amazing period and there’s always something new to learn about it.  I hadn’t realized, for instance, that on the day Roosevelt took office, the banking system had ceased to function.  To prevent bank runs, governors were declaring bank holidays, and that day the rot reached the biggest banks, in Illinois and New York.

On the other hand, perhaps the lack of hindsight isn’t a vice, as Allen can convey the full frustration felt at the time.  Allen thinks the economy had a structural problem: industrialization was reducing the need for workers on farms and in factories even as unemployment soared; at the same time, the concentration of industries into megacorporations made it hard to start up new enterprises.  (He points out that the banks were sitting on plenty of credit; there just didn’t seem to be much to lend to.  The megacorporations could fund their own research and expansion.)  There’s some truth to the idea of restructuring– e.g. the share of the population engaged in agriculture went from 21.5% to 16% from 1930-1945.  But the structure hypothesis doesn’t explain why the preceding and following periods were prosperous.  It looks much more like a demand crunch.  (Moral: don’t listen to businessmen about how to end a recession.  They have no idea, and their vague notions about “confidence” and “deficits” are plumb wrong.)

Again, one of the lessons of Allen’s books is how little has changed in America’s political structure.  Hoover was not as inactive as one might think– he had some small-scale stimulus going– but the business class had about the same program as today: prop up the banks, then just wait for things to get better, forever if necessary.  There was a good deal of horror over Roosevelt going off the gold standard, establishing relief programs, dividing commercial and investment banking, supporting unions, raising taxes on the rich, and above all regulating business.  On the other hand, when Roosevelt moved toward them in 1937– scaling back the New Deal and trying to balance the budget– he was rewarded with a resounding recession.  As Allen points out, of all the things Roosevelt tried, the only things that arguably worked were stimulus spending and devaluation.

The most striking difference in our times is the near-absence of a radical left.  Roosevelt had to deal with substantial movements (Huey Long, the Townsendites, the unions, the socialists) who thought he was moving way too slowly and actually coddling business.  Not that this prevented his critics from calling him a dictator or a communist.  In general the middle and upper classes disliked him– but the country as a whole was all for the New Deal; he won re-election in the midst of of the Depression by a 61% landslide (with broad coattails: Congress was 3/4 Democratic).

Also striking is the regional difference: the South was then a Democratic stronghold, and Republicans were strongest in the Northeast.  (It’s also worth noting that this was well before the Civil Rights era.  Though there were some victories for blacks, they’re all symbolic– e.g. Marian Anderson singing at FDR’s inauguration, Jesse Owens winning medals in Berlin.)

Everyone knows that the war ended the Depression; people often seem to think this was some kind of fluke with no contemporary application.  But economically, what the war did was make it politically acceptable to greatly multiply the size of government stimulus.  Roosevelt’s ’30s-era stimulus was too small, and had the same effect as Obama’s: improvement but no end to the economic doldrums.

Allen once refers to Roosevelt as a “cripple”; I had thought his handicap wasn’t general knowledge.  But some Googling tells me I was wrong; it was well known that Roosevelt had polio and used a wheelchair, but the extent of it was downplayed.

Allen does his best to indicate the temper of the times, and makes a case that the ’30s in general were more sober (though not in the literal sense: we finally got rid of Prohibition) and that the mere rebelliousness and hedonism of the ’20s was largely gone– though there was no return to Puritanism.  (He quotes a survey that found that something like 70% of couples had sex before marriage.)  The intellectuals of the day did their best to focus attention on social problems– even as Hollywood pretended that there were none.  In wider histories of art, this makes the ’30s look like a strange blip: modernism was called off for a decade!

A sobering thought for bloggers: many of the cultural figures Allen names are still known… except for the opinion columns.  You can have a whole nation hanging on your analysis of politics, but no one will want to re-read them in fifty years.